Loading
Skip to content
STEUN OEKRANE DOOR TE DONEREN. KLIK HIER VOOR MEER INFO.
Cart 0
Over the last six years of attending cons we've received all kinds of requests: I have been asked to sign our hang tags and tshirts, I have been asked to draw a quick sketch of our characters, we've had customers take photos with us, we've been hugged, Aldora and I have even both individually have been asked on separate occasions for our home phone numbers. There was even someone who bought six tshirts and wanted all of them signed. But I think this moment at the Edmonton Expo stood out, as I was taken aback by it. These four teen girls showed up to our booth like a tornado of energy pointing and discussing amongst each other all our tshirt designs. At first I was suspicious of their intentions, but then they joined us in on their conversation telling us they loved the characters. Once we explained to them that we created all the artwork they went into excitement overload! They picked up a few shirts, and buttons, and stickers, and then they proceeded to individually ask that I sign (from left to right) their notebook, sketchbook, program guide, and arm! A completely unexpected experience at what had been, up until then, a pretty quiet show. 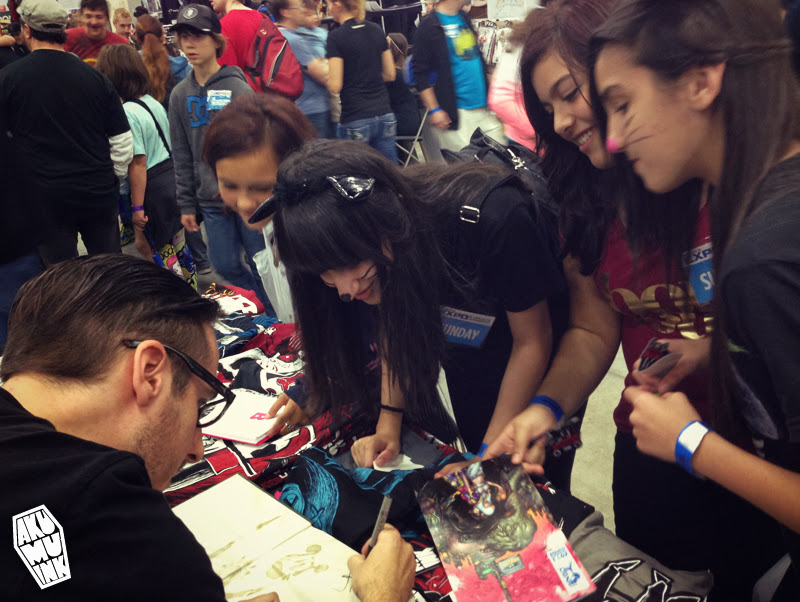